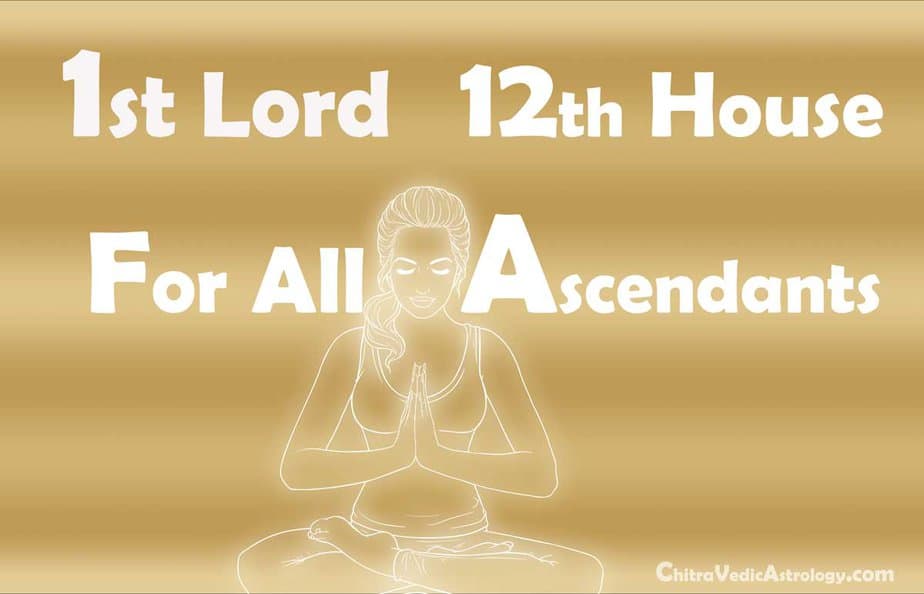 Meaning of the1st Lord in the 12th house for Your Ascendant

In general, the 1st lord in the 12th house for all ascendants means that the entirety of your life and being is directed towards being in isolation. You’re someone that enjoys their own company and loves to isolate and separate yourself from the crowd the first chance you get. Your personality is all about being alone and enjoying the things you love in the privacy of your own company, where there’s no one else. All of your focus is directly landing on the other world, which we also term the spiritual realm. This is why people like you are more prone to working in private hospitals and asylums rather than going to and becoming a salesman or other professions that are more crowd-inducing. Your comfort, whether it’s your work or any other field, lies in a place that is peaceful and isolated. In addition to that, depending on the ascendant that is ruling the 12th house, some people with this placement are also quite attracted to working in distant foreign lands, thousands of miles away from home. This placement induces a multitude of different settings that can be shown in the personalities of people, however, the strongest and main focus is always the isolation-loving quality that is found in people with this placement. The 12th house always takes you into the imaginative world, and that is why people like you are often very imaginative and highly spiritual.

The 1st lord Mars in the 12th house for Aries Ascendant means that you have a fighter inside you. This is because Mars itself is a planet that is highly fierce, and wants to dominate all others when it comes to competing. Most athletes out there have this placement, as this quality is what allows them to dominate against all others when they compete. When this action-driven planet goes into the house of spirituality, the 12th house, it shows that you have a high aptitude for becoming a teacher of yoga or a guru that exercises martial arts and teaches his/her disciples. Someone who likes to venture into the wilds to find out about ancient practices, and get closer to spirituality and its never-ending teachings. Spiritual meditators are also often seen from this placement, especially if it’s a well-placed Mars. However, if Mars isn’t well placed, it often induces criminal activities in one’s life, leading someone onto a path that can get them into trouble later in life. In another setting, this placement also shows that you can go on to be an engineer in foreign lands, as this planet also represents the mechanical abilities of a person.

The 1st lord Venus in the 12th house for Taurus Ascendant means that there’s going to be some burden in your upcoming life, especially in marriage. You might go to foreign lands and end up falling in love with someone, only for it to end up in an ugly divorce. If Venus isn’t in a good sign, this situation can lead to you losing a lot of financial assets and value as well, which creates a lot of problems for you in the long run. On the other hand, you’re a person that is very keen on getting new experiences during your bed pleasures. Venus in the 12th house is a placement that makes a person highly sexual, to the extent that you might be working in the porn industry, or have worked at some point in your life. This is also why this placement also denotes people that have a crippling sex addiction as well.

The 1st lord Mercury in the 12th house for Gemini Ascendant means and represents several different things for you. In specifics, it can mean that you’re going to go to a place that is very foreign to you, and have a career or job in a place that is highly related to accounting, perhaps even a multinational company. This is because this placement of Mercury, especially in the Gemini ascendant, signifies the house of savings and finances. Since Mercury represents the calculations and business in your life, hence there’s a high chance that you’ll go on to work in an accounting and finance-related field, far from your homeland. On the other hand, writing careers are also shown from this position, as what planet better represents and signifies writing in education than Mercury. The second house, concerning Gemini Ascendant, signifies singing as well, which hints at the singing talents, often hidden, that you possess. However, all of these mentioned things are only truly visible and shown when this kind of Mercury is supported by other planets, though that is more likely to happen as the planet itself is quite communicative, and actively communicates with other entities through you.

The 1st lord Moon in the 12th house for Cancer Ascendant means that you have spent the entirety of life with your mother in a place that was very far from your homeland. Your mother was someone who took you to foreign lands more often than usual, and these travels to distant places are what shaped your personality. This is one of the few placements that denote that you have a high chance of permanently settling in a foreign place. People like you tend to leave your homeland forever and settle somewhere far from where your mother raised you. This placement of the Moon can make a person highly imaginative, and this is why you tend to daydream a lot. Whether you’re working or sitting in the comfort of your privacy, your mind often wanders off to other worlds, and you seem to be stuck in daydreaming phases for long sessions. You don’t want to work, you don’t want to interact with anyone else, you just want to sit in your chair and let your brain run wild. Also, the Moon is in the sign of Gemini also shows that people like you develop an interest in writing and communicating your thoughts to the masses through artistic passions.

The 1st lord Sun in the 12th house for Leo Ascendant means that your father had a major influence on your decision to go into foreign lands. Usually in this placement, an embarrassing element exists between the relationships of the child and the father. Your father may have done something that embarrassed you, or the opposite might have happened between the two of you, and because of that, you had to leave your birthplace and venture towards a place that is very distant from you. On the other hand, this placement denotes doctors and diplomats as well, people who go into foreign lands to learn more about their fields, and make money there. Furthermore, this is the planet that also dictates your spirituality, because the Sun is a sattvic planet. This instills a lot of spiritual qualities inside you and also directs a lot of people’s lives into being a spiritual guru and a portal of guidance for other people. If Jupiter aspects the Sun in this position, you can also have a career in isolated places like hospitals and monasteries, with doctors being quite a common profession with this placement. Lastly, the Sun also represents authority inside you, hinting at a career in the police department, or if we’re being more specific, being a warden at the jail.

The 1st lord Jupiter in the 12th house for Sagittarius Ascendant means that you’re heavily into astrology and all the tantric aspects of this life. People like you love to meditate and dwell on the truths regarding peace in life. You want to gain knowledge of the hidden things in the world, things that most people don’t even know exist. Since Jupiter also represents the higher education and finance of your life, this placement of the planet Jupiter in the 12th house shows that you’ll find yourself working in a very spiritual organization, with the role of finances being assigned to you. Furthermore, you can also be a guru who teaches other people the concepts of martial arts, or a teacher of Yoga, telling people about the spiritual benefits of it and how it can help them enlighten their life. Another interesting thing that occurs with this placement is that oftentimes, dealing with deceased entities becomes a regularity. People having this placement are often the ones working in a mortuary, where they deal with these kinds of things daily. Besides this aspect, Jupiter is a highly spiritual planet, and in a good sign, it shows someone who has mastered the teachings of spirituality and peace in life.

The 1st lord Saturn in the 12th house for Capricorn Ascendant means that the losses that you’re going through in life right now will be slowed. In return, Saturn will start to show big gains and positive things in life. This happens because Saturn is a very slow-moving planet, and it implements that against the downfall and losses in your life. Financial gains in foreign lands are something you’ll start to see a bit later in life, and from that point onwards, you’ll see yourself go up, both mentally, financially, and physically. This will be made solely because of your presence in foreign lands. You’ll be forced to put a lot of work and energy into whatever you do, and your hardships will bear fruit. Since Saturn is all about manual labor, the jobs and work that you’ll do in foreign lands will mostly include construction work, labor in oil-related fields, and similar professions like this. However, going to a much easier side, if Saturn is a good sign, it can also show that you can be working in an administrative field in the government, or perhaps an attorney working for the benefit of the people. One thing about is how much importance you give to the organization and structure of anything that you see, and this quality of yours is something that’ll help you earn money in foreign lands. 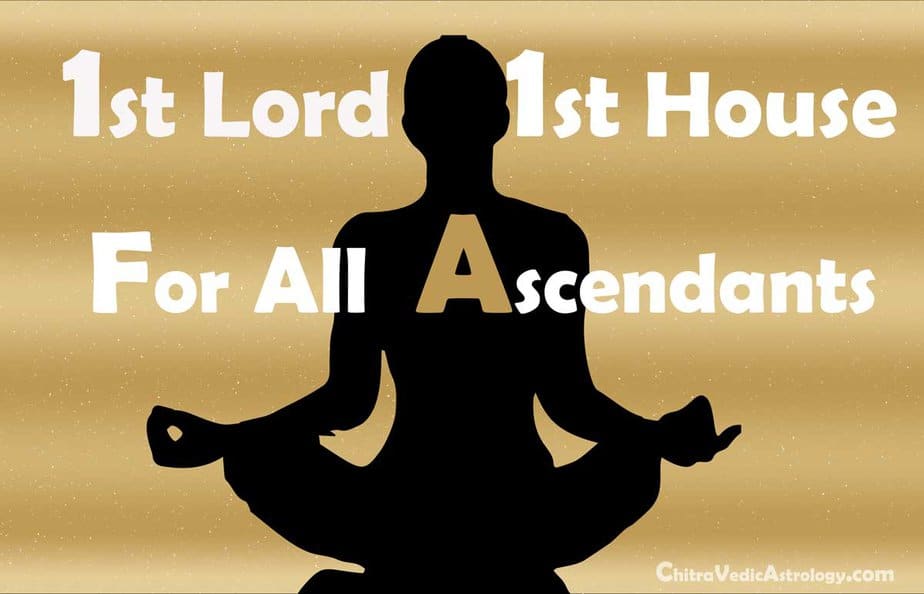 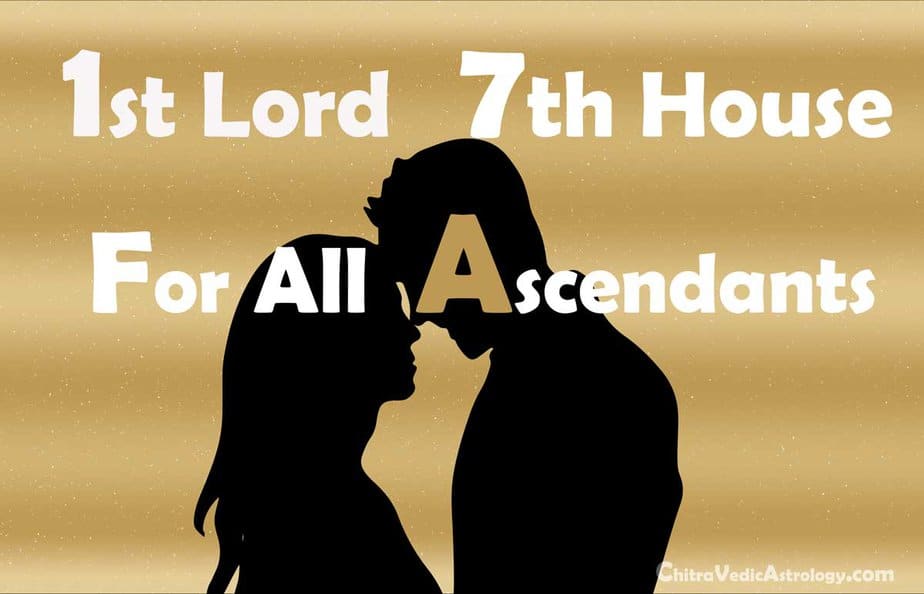 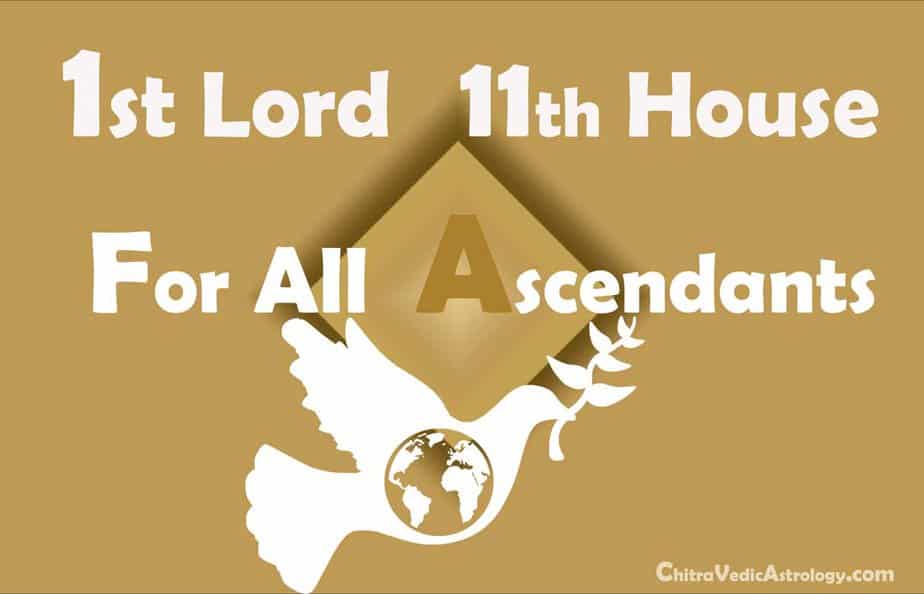